After waving goodbye to his family and friends in Pennsylvania, Bo Glover sat on the squeaky seat of his convertible VW Bug and began an adventure west. Birkenstock clad feet pumped the clutch, accelerator and brakes for 2717 miles until he finally reached his destination… beautiful Newport Beach, California.

Bo wanted to volunteer in his new community so he did what any of us would have done before the Internet – he looked up opportunities in the phonebook!  The first thing he found was the Environmental Nature Center.  He began volunteering at the ENC in 1991, and the rest is history. His early contribution included building trails, restoring habitat and leading educational tours.  One thing led to another and Bo found himself in the position of Executive Director of the ENC, and he has held that position since 1995.

When Bo joined on at the ENC, the Center sat on 2 1/2 acres leased from the Newport Mesa School District.  The NMUSD offices were located on an adjacent acre, which provided frontage to the street.  The ENC was hidden behind them.

In 1998 the District put its acre up for sale.  Bo quietly and persistently recruited community leaders onto the ENC Board to carry out a “Save Acres for Nature” campaign.  Bo and the board achieved their first great victory – they raised enough money to purchase the School District property in 2000.

In 2007, after some very successful fundraising on the part of Bo and the ENC Board, the ENC broke ground on an 8,500 square-foot Learning Center building, which became the first building in Orange County to receive LEED Platinum certification by the U.S Green Building Council, the highest level of certification possible. The sustainable learning center provides vital classroom and educational spaces and serves as an educational tool itself. In May 2008 the staff spent their last day working out of a trailer, and stepped foot into a work environment that is healthy for humans and the environment.

In Winter 2012 Bo discovered that the property adjoining the Center was going to be coming up for sale.  After more successful fundraising efforts on the part of Bo and the ENC Board, the ENC purchased the adjacent 1.3-acre property at 745 Dover Drive.  The Center will expand its natural habitat, develop a nature play area, and construct our community’s first nature based preschool.

Under Bo’s leadership the ENC has grown to become our community’s foremost authority on ecological responsibility, sustainable practices and environmental education. The Environmental Nature Center, now known simply to thousands of visitors through the years as “The ENC,” has become a landscape for learning, a sanctuary from life’s pressures and a place of preservation and instruction, serving over 50,000 students and visitors annually.  The ENC is recognized as a leader in science and social science education providing opportunities for increasing our community’s knowledge, understanding and appreciation of the natural world.

Bo is Past-President of the Association of Nature Center Administrators (ANCA) and California Society for Ecological Restoration (SERCAL). He was also the Chairman of the City of Newport Beach Castaways Park Advisory Committee from 1999 – 2003, a member of the Newport-Mesa Schools Foundation Grants Allocations Committee from 1996-2012, and served on the Environmental Board of the City of Huntington Beach from 2009 to 2012. Bo, a LEED Accredited Professional, serves on the Board of Directors of Orange Coast River Park Inc. and the Orange County CREEC Network Advisory Committee. 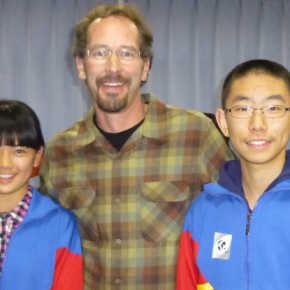 Bo went to China in 2012 where he visited Beijing Normal University and Bejing Capital University, one of the oldest universities in China, where he spoke about the vision of creating nature centers in China. Bo also teamed up with representatives from the Nature Conservancy in the Sichuan Province – home of one of the last remaining Panda habitats in the world. He exchanged ideas, offered advice, and shared knowledge based on 20 plus years of experience working at the Environmental Nature Center.  While in Beijing he also taught a group of Middle School students!